On Friday, July 20, we all have a chance to help maintain and preserve Lincoln Park. It is Volunteers in Parks Day, sponsored by the Seattle Parks Foundation, EarthCorps, and Seattle Parks and Recreation.


Posted by Mark Ahlness at 8:53 PM No comments:

There is a lot of fantastic stuff going on in Lincoln Park every day. It's important that we pay attention:
From the the newly updated "About" page


This blog was started as the result of, and in opposition to, a proposal that would have brought a Zipline course to Lincoln Park in West Seattle. Thankfully, the proposal was withdrawn. See here for complete coverage from the West Seattle Blog. Many thanks to those who worked so very hard to get the proposal withdrawn.

The immediate threat to the park has passed, but the needs for constant vigilance and active participation to Preserve Lincoln Park as a unique urban sanctuary remain - as does a desire, voiced by many recently, to stay connected as citizens, for the good of Lincoln Park, and all of Seattle's Parks. So this little blog will hang around for a while...

No Zipline, and a Final Letter

There was a huge, collective sigh of relief in West Seattle, perhaps even noted as a minor seismic event on a meter somewhere.... Many, many thanks to all the people who worked hard to organize, attend, and participate at gatherings, in person, and on-line.

A very special thanks to all the people who wrote letters to the Mayor, the City Council, and the Seattle Parks Department. I know there were probably thousands of emails sent in opposition this past week. I believe that those letters most likely set the table for the tipping point that occurred at Tuesday's meeting.

I will close with an email letter that was ready to be sent to the City Council and the Parks Department, but never got sent, because the decision to reverse the zipline proposal was made so quickly. It is from a former student of mine. I am very proud of her, and I hope it serves as a reminder to all of us to listen. To everyone. Always.

I am Siobhan and I just turned 12. I am sending you this email because I think it’s a horrible idea to put a zipline in Lincoln Park!!!! It’s just crazy! Now I know what you’re thinking, you’re probably thinking, it’s no big deal, it’s just a big zipline, right? Well, IT IS A BIG DEAL!! Now I know it might not have a super big effect, but come on WE, and I mean WE, have to get down to the small things, because sometimes the small things are the most important things. Like the eagles and owls. If you ok the zipline, do you know what is going to happen to them? They will leave! And a lot of people go to Lincoln Park to see the eagles and owls. I even bet YOU go to Lincoln Park! Now isn’t it awesome when you see one of those beautiful and majestic eagles flying around or getting material for their nest or if you are ever so lucky to see one of those little adorable but ever so powerful owls sitting in their nest? Now don’t you think it would be HORRIBLE if that zipline was built and away went the beautiful eagles and adorable but powerful owls? I absolutely think it would be horrible.

I also love to go to Lincoln Park with my friends and even with just my sister and parents! I also love how quiet and peaceful it is at Lincoln Park, but if you build that zipline it would be so loud! It would probably feel like a huge fair instead of a peaceful park.

Now the next time you see an eagle or owl or a picture of one YOU look it straight in the eye and YOU think to yourself “Do I really want to take away this magnificent animal’s home away from it?” And if you decide you do, try telling it “I am going to take your home and it’s going to be ALL MY FAULT.” Or the next time you see a kid think “Do I really want to take away such a wonderful place from these kids?” And also remember I love to go to Lincoln Park but if you build this zipline I won’t want to go anymore.

The Fauntleroy Community Association held a meeting Tuesday, July 10th. Rather than try to write about that amazing meeting, I refer you to this wonderful live-blogged account from the West Seattle Blog:

Letter about the zipline

Trileigh Tucker, professor at Seattle University, recently sent a letter to to a member of the Seattle Parks and Green Spaces Oversight Committee. In it she writes compellingly about the GoApe zipline proposed for Lincoln Park, covering these main points:

It is a well written and thoroughly researched letter. For anyone even a little concerned about the effect of a zipline in Lincoln Park, it is a must read. Take a few minutes, and read it here. (pdf)
Posted by Mark Ahlness at 11:56 AM No comments:

On July 9 a group of 38 concerned and passionate citizens met at C&P Coffee to discuss the proposal to bring a zipline to Lincoln Park. Opposition was unanimous. Attendees were from all parts of Seattle and surrounding cities.Here are a couple of pictures as the meeting was just getting started. 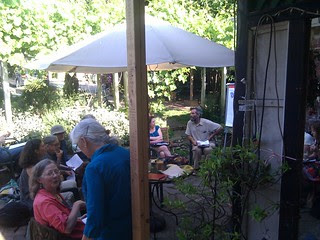 Passions ran high, and emotions were intense, as people shared what the Park meant to them and offered suggestions for how to combat the zipline proposal. 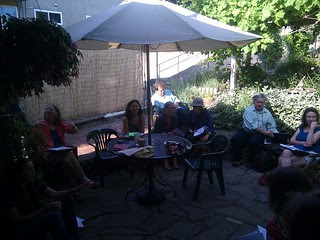 The West Seattle Blog covered the event and tweeted this picture after we got underway:

Much more to come, here and on the Facebook Group. Stay tuned.
Posted by Mark Ahlness at 11:11 PM No comments:

There is an informal gathering of concerned citizens opposed to the zipline proposed for Lincoln Park:

There will be an agenda and an informational handout to help organize the effort. Good company and great coffee - hope to see you there!